Baltit Fort is a prominent historical site in Pakistan and this place offers a panoramic view of Hunza Valley and the highest mountain peaks in Pakistan. Baltit Fort was the home of Ayashkutz royal family of Hunza for 700 years. Formerly known as Kanjut, Hunza was an independent principality ruled by a hereditary monarch named Mir Tham in the local Burushaski language. In the 19th century, Baltit Fort was part of the Great Game. In 1891, as part of an overall strategy to contain the Russians, British troops invaded Hunza and eventually occupied Baltit Fort and Hunza state. The structure of the fortress has undergone many changes over the years. The fort was abandoned in 1945, and Mir Ghazanfar Ali Khan later donated the fort to Baltit Heritage Trust. The Aga Khan Trust for Culture renovated the Baltit fort and is on the tentative list of UNESCO’s world heritage sites since 2004. The Baltit Fort now stands as a heritage site in Pakistan to be visited by tourists from all over the world.

Ancient Baltit fort is located in Hunza Valley, northern stretches of Pakistan. Baltit Fort was the capital of Hunza State, and the old settlement is still intact to this day.

Because of the seismic activity in the region, masses of rocks and sediments were carried down and deposited by a glacier, that the Baltit Fort was placed by for protection. This clever placement made one less side of the fort to protect from invaders!

Who lived in Baltit Fort?

Hunza was an independent principality headed by a hereditary ruler ‘the Mir’ Tham in the local Brushaski language.  The Mirs of Hunza is a family dynasty, claiming their power and authority came from the Ayash (sky), or dwellers of the sky. Their bloodline dates back to a refugee prince Azar Jamshed of the Kayan Dynasty, whose great-grandson Sahib Khan, known as Girkis, was awarded control over the Hunza valley. Azar Jamshed’s other great-grandson, Maghlot, had control over the Nagar valley. We can blame sibling rivalry or power-hunger; Maghlot killed Sahib Khan (Girkis) during a hunting expedition and took control of the valley. This Mir did not have a son, so his daughter, Nur Bibi, succeeded the throne and altered the bloodline when she married fugitive prince Shah Khan Ayasho. Shah Khan Ayasho was brought from Afghanistan. This line continued right until 1974 the last reign of the final reigning Mir (Tham), Mir Muhammad Jamal Khan.

The Mirs of Hunza knew how hard it was for invaders to attack this region, but that did not mean it was impossible. The clever move was to create a fortress or stronghold to shield the citizens against attack from outsiders and any sieges set upon them.

While the Mir’s of Hunza originally resided in the Altit Fort, later Mir’s of Hunza built Baltit Fort and moved to Baltit Fort placed high above the valley, against the side of the glacier for the best vantage point. Baltit fort age is around 700 years. The foundation of the fort dates back to the 8th century, although the structure itself has undergone many additions and modifications over the years. Carbon dating indicates some of these additions were made in the 13th century.

In the 16th century Mir of Hunza, Ayashoo II wed Princess Shah Khatoon from Baltistan. She brought with her many artisans who influenced the design visitors to the fort see today. Baltistan was heavily influenced by Tibetan culture and architecture, so the face-lift the new Princess ordered resembled the Potala Palace in Lhasa. Additional changes were made to the fort, including the addition of colored glass, a more colonial-style front elevation, and limewashing.

During the late 19th century Hunza became embroiled in The Great Game. In 1888 Russian Captain Bronislar Groubehersky visited Hunza and met Mir Safdar Ali Khan in Baltit Fort and offered his military assistance against the British.

In 1891, as part of an overall strategy to restrict the Russians, the British invaded Hunza and eventually conquered the region after 6 months of resistance. In 1891, the British made the last Mir Safdar Ali Khan (1886-1888) flew to China along with his brothers Prince Muhammad Nafis Khan and Mir Muhammad Nazim Khan.

Mir Muhammad Nazim Khan was later brought back from China and made Mir of Hunza by the British in April of 1892. Hunza enjoyed semi-independence during British rule.

The people of Hunza themselves have a less documented heritage. Some believe warriors of Alexander the Great settled here with their Persian wives, while other local traditions trace their ancestry to Huns or Mongols who were fleeing their homeland.

The diversity of this region is seen in many ways, including the languages spoken here. There are four separate ethnolinguistic groups represented in Hunza.

First is Shin, who reside in the lower part of the Hunza valley. Then, you have the Brusho, who live primarily in the central portion of Hunza. Next, you have the Wakhi, who are immigrants from Central Asia who occupy the upper Hunza. Finally, you have the Dom, a small endogenous community, once musicians and artists during the Hunza state.

Islam, the Shia Asnashari school of thought, came to Hunza in the 16th century, after Ayasho-II married a princess from Baltistan. Approximately two centuries later, on the invitation of the Mir of Hunza, Mir Salim Khan (1790-1824), Ismaili preachers visited the region. Hunzukutz converted to Shia Imami Ismaili Islam and adopted Ismaili doctrines, except in the Ganesh village.

Visitors feel like they are stepping back in time when wandering through this structure.

Baltit Fort main structure is a pegged timber frame because it can handle the seismic activity in the region better than a more rigid material.

Visitors walk through the main entrance via a stone staircase and a long-hung wooden door. Small doors like this were designed to keep brutal winter weather at bay and to help defend against any intruding outside forces.

Once on the first floor, visitors observe a wooden skylight within the open square structure so often found in forts and used as gathering spaces. This open space has many adjacent rooms and several ground storage spaces used to preserve wheat grain. This first floor also is the home to the main kitchen area with a large traditional fireplace for cooking and super-secret conference rooms where the business would take place. There is a small burrow built into this room that would house any gold or treasures the Mir kept on hand.

From the first floor, one can access the ground floor. Many changes over the years have taken place in this part of the building. Experts can see the difference in periods between wall structures, tunnels, and flooring throughout this level. Much research is still needed to determine whether it held guards, prisoners, or defense soldiers.

The upper floor provides a courtyard with exceptional 360-degree views of the surrounding valley. Visitors will find a hand-crafted and beautifully designed wooden ceiling and a wooden throne. This space is where the Mir of Hunza would gather with notable villagers or conduct public events and meetings. The left corner of the roof houses the watchtower and the Wooden Mosque.

There are reception rooms here filled with pictures of the royal lineage, armory, and Ibex heads. A carved skylight suspended in the middle of the ceiling provides all the light into the space.

You will also find intricate carvings on the wooden door of Mir’s summer bedroom, a space lined with a golden-woven carpet, and historical pacts and agreements on the walls. Large colored glass-paneled windows line the main wall overlooking the valley. A private dining room with a fireplace adjoins this space.

There is a wooden door on the upper floor that takes one into the backyard area of the fort. There was once a watchtower outside this door, but the British ordered it demolished. Visitors can see the Mir’s water channel from this spot as well as the Ultar glacier.

There is much varied and captivating history to this Fort over hundreds of years. The best way to learn more is through visiting this unique structure yourself!

Baltit Fort was abandoned in 1945 when Mir Jamal Khan and their family moved to the newly built palace in Karimabad, Hunza. Mir Ghazanfar Ali Khan gracefully donated the fort to the Baltit Heritage Trust to restore and preserve it. The donation of the fort went to the Baltit Heritage Trust which was established as a caretaker for the facility. In1985 The Aga Khan Trust for Culture brought on Richard Hughes and Didier Lefort to develop a plan to save the Baltit Fort from further disrepair. Their ideas became a full-scale, complex conservation proposal. Hughes, an English engineer specializing in seismic proof structures and soil buildings, worked with Lefort, a French architect, and designer. Now the restoration could begin, and the current museum was established. Baltit Fort has been on the tentative list of UNESCO’s world heritage sites since 2004. On 29th September 2006, The President of Pakistan, Mr. Farooq Laghari, and Prince Karim Aga Khan inaugurated the restoration of Balti Fort in Karimabad Hunza. 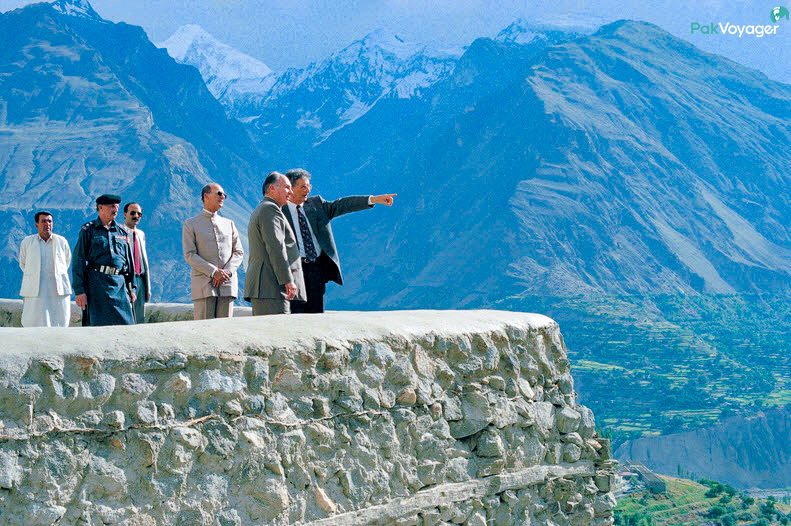 Baltit fort yearns for tourists to discover its ancient architecture, beautiful surroundings, and regal history. Baltit Fort and Baltit old settlement are considered the best historical places in Pakistan to visit by tourists.

Baltit Fort tour is a guided walking tour by an expert guide. A ticket is required to purchase before the tour starts. The ticket office is in Baltit Fort premises. Tours typically open with a presentation followed by an introduction to the history. The rest of the tour consists of visiting various parts inside and outside the fort that is significant to Hunza history and how it was used during different periods in time. Baltit Fort guided tours usually last around 25 to 35 minutes.

What is the Baltit Fort entrance fee?

The price of the entrance to the Baltit Fort is PKR 1200 for foreign tourists and PKR 600 for locals and domestic tourists.

If you are looking for an authentic Pakistan tour to visit historical places of Pakistan be sure to book with PakVoyager (Pakistan Online Tour and Travel Booking Platform). We offer a variety of authentic Pakistan tour Packages that will take you to the best cultural and heritage sites in Pakistan and give you a true Pakistani experience. Our knowledgeable guides will show you around some of the most beautiful and historical sites in Pakistan. Contact us today to learn more about our tour options and start planning your next adventure!

Click here to learn more about Things to do karimabad Hunza valley.

Ways To Pay Us